What Do I Do if a Child in My Care is Self-Harming? 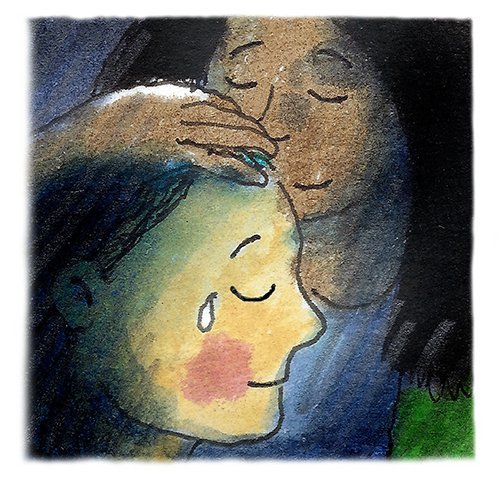 A child in your care hurting themselves is one of the most worrying and scary things any foster parent has to face, and it will have a big emotional impact upon you, even if you’ve experienced it before. As terrifying and incomprehensible as it can seem, it’s actually quite common for traumatised children to do this, and it’s not any reflection on the care you provide them, nor their feelings about you. I hope that this blog post might help by explaining why some children self-harm, and suggesting ways you can respond.

Different behaviours can be seen as self-harm. These can include scratching, bruising, burning and cutting themselves, by pulling their own hair, and by overdosing. Self-harming is not usually an attempt at suicide, and nor is it usually a cry for attention – it is a way of coping. Once a child begins to self-harm, and finds it brings some temporary relief to their emotional turmoil, it can become a compulsion. The child may feel an instant relief of pressure, but it is brief and often replaced by feelings of guilt and further pressure – this is how the cycle continues.

What causes a child to self-harm?

It’s not always easy to work out the causes, and the child may not know themselves. It’s often a coping mechanism for past or present trauma. The child may be being bullied, struggling to cope with separation and loss (often a particular issue for Looked After children), grieving, or perhaps they are feeling rejected, unworthy, lonely, angry, sad, out of control or even just numb, and worried about why they aren’t feeling anything at all. There’s a link between depression and self-harm – sometimes the physical pain that is caused by self-harming is easier to deal with than the emotional pain they struggle with. Sometimes, children punish themselves by self-harming, for something they have done, or for something they have been accused of doing.

How you will know if the child in your care is self-harming?

Sometimes they will tell you or show you, and it’s important that you respond in the right way if they do – I’ll come back to this later. More often though, children hide injuries caused by self-harming, sometimes going to great lengths to do so, and try to explain away their injuries as ‘accidents’ if they are found out.

Physical signs of self-harm are commonly on the child’s head (bald patches), chest, wrists, arms and thighs (cuts, bruises and burns). Some children will pick at wounds just as they are healing, and this can be a form of self-harm. Emotional signs are low self-esteem and self-blame, depression, tearfulness and low motivation, unusual eating habits (sudden weight loss or gain), drinking or taking drugs, and becoming withdrawn and isolated (perhaps isolating themselves in their bedroom).

How should you respond?

The first and most obvious thing to say is that if a child is physically injured, they may need medical attention. In this case try to stay calm and try not to voice disapproval whilst you provide first aid. It may be that you provide them with first aid supplies and give them verbal guidance – having control can help a child deal with the situation. If their wounds require medical attention, don’t delay going to the hospital.

Beyond this immediate response, which will undoubtedly be recorded on an incident form which you will pass on to your Social Worker (don’t forget!), you need to involve the child’s Social Worker and your Placement Manager. You need to listen to their advice because they know the child in your care and will have their own views. They are best placed to help you try to understand what is making the child self-harm, and what the ‘triggers’ are. Dealing with the causes is much more effective than taking away the means by which the child is self-harming, because anyone who really wants and needs to hurt themselves will find a way to do so. That said, we have Health & Safety and Safe Caring policies for good reason!

Please remember that you do not have to face this difficult situation alone – your Social Worker is just a telephone call/email/text message away! Let them know what’s happening – they’re there to support the child in your care, by supporting you.

If you feel you could help a child or young person to heal by offering a spare bedroom in a stable, secure and loving home, we provide our foster parents with an allowance to care for a child, and training and support that is second to none. Please call our friendly team on 01603 559255 to find out more about fostering.